There are a few sections of campsites here. I decided to go about half of a mile back, which was a bit removed from the other campers. This BLM land is about six miles from the Cottonwood Visitor Center of Joshua Tree National Park. Be sure to fuel up before entering the park. It is quite large.

END_OF_DOCUMENT_TOKEN_TO_BE_REPLACED

I did not camp here, but I discovered it during my visit to Joshua Tree National Park. The campground is called White Tank. There are 15 dry camping sites, all of which are available on a first come, first serve basis for $15 per night. There are pit toilets on site, too.

END_OF_DOCUMENT_TOKEN_TO_BE_REPLACED

On Wednesday I will be boarding a Holland America cruise ship headed toward the Panama Canal. This will be my seventh cruise in 12 months. Here is the rundown…

I was also able to work in a few camping trips to Lake Lanier, Amicalola Falls, and Ooltewah (Tennessee). I hope to make 2017 the year of camping now that Scotty is in the mix.

I had such a good time camping last month at Lake Lanier that I began to question if buying a Scamp was a necessity. Is a toilet and shower really required? Do I need to pull 2,000 pounds all around the country?

To help me make the decision, Patrick and I loaded up Mindy and headed for Amicalola Falls. The plan was to spend a couple of nights there before heading on to another site for a couple of days. I figured this would allow me to test the Coleman instant tent, including the ease (or lack thereof) of setup and take down.

I was pleasantly surprised at the ease of setup for the tent. Was it a “60 second instant setup” as touted on the marketing propaganda? No, but it was fairly easy… especially considering the size of the tent (14′ x 10′).

The two nights at the campground were great. Pat and I had quite the setup… LED lights and a fan overhead, an electric cooler stocked with beer, and even a hot plate for breakfast and dinner.

The second night did prove to been interesting when I awoke at 3AM to find that Patrick had managed to pry open the zippered door with his paws. 😮

After two nights at Amicalola Falls, it was time to take down the tent and move on to Yonah Mountain Campground. Since our new home was only about an hour away, I decided there was no need to store the pop-up polyester pad in the carry bag, so I stuffed our gear into Mindy and off we went.

Although the initial setup and take down of the tent was painless enough, the second setup would prove to be a bust. It seems that I bent one of the poles while loading up the Jeep. I only realized this after struggling through the reassembly for about 45 minutes.

I still love camping and the outdoors, and I plan on doing it a lot more. Check out the pics from my Amicalola Falls hike.

OK… so, yeah, I have a shitty memory, so… I have decided to chronicle my journeys on a travel map.

As memories flood my mush brain, I will be sure to add other places. 😛

After a day of hiking in Chicopee Woods, I decided a stop at the campground’s beach was well deserved.

Unfortunately, Lake Lanier was/is down about six feet and the beach had pretty much disappeared.

Yup… that yellow line you see is the barrier you shouldn’t swim beyond. 😛

I still managed to wade up to my waist, as I sunk into the muck of the lake. So, yes… I went to the beach. 😛

After spending the night at my perfect spot, it was time to shower and do my business at the campground facilities.

I was pleasantly surprised at the cleanliness of the showers, and each had doors and shower curtains. This also lead me to question if I truly need a camper with a bathroom. After all, how much time would I spend in there?

I spent my day hiking the West Lake and East Lake trails at Chicopee Woods. It was beautiful, as you can see from the pics. 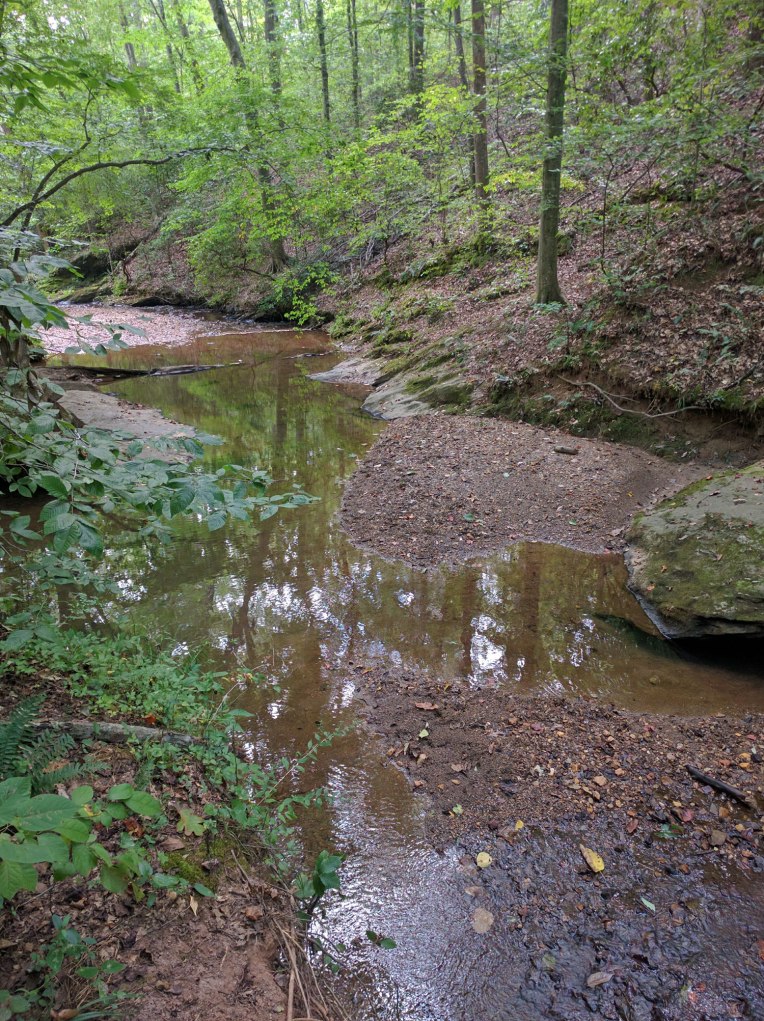 I spent the weekend solo tent camping at Old Federal Campground at Lake Lanier. This was my second time camping alone, and I had a great time.

I had researched the campground in advance and had decided on tent site 22. The facility map on the Recreation.gov site provide a view of most of the sites on the campground.

I arrived early… at 1:00… the check-in time listed was 4:00. Still, Grace (the person working the office/entrance) was a delight and allowed me to check in early. After paying my $40 for the two nights, I was anxious to check out my lake view and set up my two-person tent.

There are seven primitive “walk to” tent sites at Old Federal Campground. “Walk to” does not mean “hike to”, so I didn’t have to worry about a trek to my car. As you can see, it was right above my site… and there was a paved walkway leading me to Mindy.

I would definitely recommend the “walk to” sites, as it made it feel like I had my own private beach. I took full advantage of it, too… spending time reading and listening to water.

My idea of camping may be different that most, as I have never been a big fan of cooking… even grilling out. So, dinner was provided by Tiny Julius (aka Little Caesars). 😉

As the sun set for the evening, I was reminded that I had picked the perfect camping site.

Save 10% on a Harvest Hosts Membership

Save 50% on Campsites with Passport America